Residents in two Leeds communities are hoping flower power can propel them to success in this year’s Britain in Bloom competition. Kippax and Barwick in Elmet were today confirmed as two of the finalists in the annual Royal Horticultural Society (RHS) contest. Kippax will be going for glory in the urban community section of the competition while Barwick in Elmet is aiming to claim victory in its large village category. They are among 72 finalists from across the UK that have been selected from a field of more than 600 entrants.

“There’s a lot of hard work to come but hopefully it will all be worth it in the end.”

Barwick in Bloom chair John Tinker, meanwhile, said: “We will be looking for as many people to support us in any way they can. We have won two gold awards in the past at Britain in Bloom so with a bit of luck we’ll be able to make it three!”

Reaction to the announcement was led by Leeds City Council’s Coun Debra Coupar, who said: “We are very lucky to have in Leeds a thriving ‘in bloom’ network which is doing such a great job making communities right across the city look so fantastic and full of colour.

It is brilliant news therefore that both Barwick in Elmet and Kippax have been shortlisted this year for a Royal Horticultural Society Britain in Bloom UK award. Two other places will also be flying the flag for the White Rose county in the contest, namely Harrogate and Filey. Yorkshire in Bloom chair Brendan Mowforth said: “[We are] thrilled to be represented by Barwick in Elmet, Filey, Harrogate and Kippax in the RHS Britain in Bloom finals for 2016. All the entrants have demonstrated consistently high standards in horticulture and community engagement over a number of years. They will make further improvements to the environment of their communities and we wish them a successful and fun packed 2016.”

Judging of the various horticultural masterpieces is due to take place over the summer.

Groups are assessed according to criteria including the maintenance of communal gardens and community campaigns to promote recycling.

A new award has also been created to recognise efforts made to recover from December’s floods. 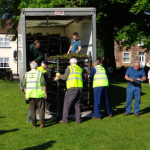 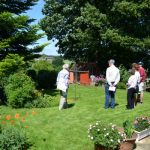